Team Manifest 2: The Five Dysfunctions of a Team

In a recent post,I announced my plan to share my current study of team-building and collaboration that coincidentally happens to be list centric. Manifest Team 2 is the second in this series that explores the lists of collaboration and teams.

Manifest Team 1 identified the Characteristics of High-Performance Teams by DeJanasz, Dowd, and Schneider.

The Five Dysfunctions of a Team: A Leadership Fable

is a national best seller having appeared on the best seller/best business book lists of the New York Times, Business Week, and the Wall Street Journal. In the book, author, speaker, and consultant Patrick Lencioni spins a fable about a new CEO who takes on the challenge of transforming a dysfunctional executive group into a cohesive, high-performance team. Along the way, the group explores and confronts the pitfalls and dysfunctions that can inhibit teamwork and performance. I found the book compelling and gripping as a good fable can be. 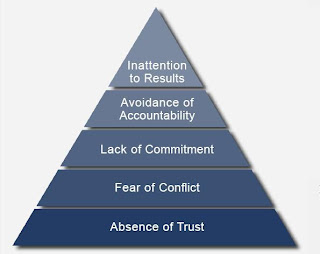 The core instructive content (the list) presented in the book centers around the five dysfunctions that Lencioni presents in the form of a pyramid model.

The first of the dysfunctions, absence of trust, stems from teams unwillingness to be vulnerable within the group. Team members who are not genuinely open with one another about their mistakes and weaknesses make it impossible to build a foundation for trust.

This failure to build trust is damaging because it sets a tone for the second dysfunction: fear of conflict. Teams that lack trust are incapable of engaging in unfiltered passionate debate of ideas. Instead, they resort to veiled discussions and guarded comments.

A lack of healthy conflict is a problem because it ensures the third dysfunction of a team: lack of commitment. without having aired their opinions in the course of passionate and open debate, team members rarely, if ever, buy in and commit to decisions, though they may feign agreement during meetings.

Because of this lack of real commitment and buy-in, team members develop an avoidance of accountability, the fourth dysfunction. Without committing to a clear plan of action, even the most focused and driven people often hesitate to call their peers on actions and behaviors that seem counterproductive to the good of the team.

Failure to hold one another accountable creates an environment where the fifth dysfunction can thrive. Inattention to results occurs when team members put their individual needs (such as ego, career development, or recognition) or even the needs of their divisions above the collective goals of the team.

A list that positively states the desired characteristic or behavior would be more compatible with my growing insight into high performance teams and collaboration. Fortunately, Lencioni provides a positive list in his summary of the book.

The members of truly cohesive teams:

Trust one another.
They engage in unfiltered conflict around ideas.
They commit to decisions and plans of action.
They hold one another accountable for delivering against those plans.
They focus on the achievement of collective results.

The list seems pretty simple but we know in practice it is difficult to achieve. It requires new team insights and consideration from every team member. And, of course, it takes a leader to set the stage.

Thanks for reading. Please lead quietly.
Don
Posted by Don Frederiksen at 4:53 AM