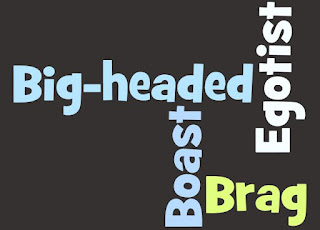 We don't appreciate when people brag. We've all been in conversations where out of the blue we hear,

"My child just made the all-star team"

and we respond by rolling our eyes.


On the other hand, there are other individuals in our lives where we might know the same information but it was presented in a manner that didn't have us rolling our eyes.

A review of the British Psychological Society Research Digest blog recently revealed a research study conducted by Dr. Nurit Tal-Or from the University of Haifa that provides an answer and insight to our question. Her research measured the impact of bragging approaches conducted in a study of over a hundred undergrads. The study offers "some insight into how to brag without coming across as big-headed."

The differences in approach came down to the simple notion of context. Quoting from the digest where Avi, a bragger and the study's subject, is bragging about his "A" grade on an exam,

The crux of it: context is everything when it comes to boasting. If Avi's friend raised the topic of the exams, Avi received favourable ratings in terms of his boastfulness and likeability, regardless of whether he was actually asked what grade he got. By contrast, if Avi raised the topic of the exams, but failed to provoke a question, then his likeability suffered and he was seen as more of a boaster. In other words, to pull off a successful boast, you need it to be appropriate to the conversation.

The research suggests a concept that we easily recognize. If you are boasting in context to the current conversation, you pass. If you boast "I bought a new (insert a favorite toy)!" without prompting or out of context, you will appear big-headed. Although, I am convinced that many of the hero-types in our midst might not mind appearing big-headed, big-headedness doesn't seem like a meshable, lead quietly type of posture.

Thanks for reading. Please keep meshing up and when you brag, keep it in context.

FYI: My #themeword for the year is Mesh.

Posted by Don Frederiksen at 6:04 AM